No VPN, No Problem!

An “NTSC” Solution for Outside Broadcast Operators

Mega-remote broadcast [OB] vans and professional team stadiums are well-equipped for “plug-in and go” coverage. That’s rarely the case at the lower tiers of sports fandom that include high school or collegiate football, basketball, or the myriad of narrow-interest sporting events. These competitions often play-out in fields far removed from bright Friday Night Lights or major metro markets with an abundance of bandwidth and connectivity options.

Unfamiliar venues and limited tech infrastructure are a frequent challenge to field engineers. Dealing with “Never Twice the Same Connection” leads to ad hoc workarounds and occasionally having to do without some niceties in order to bring a remote event to air. On-site, once the basics – power, signal path, etc. – are established, some less obvious necessities need attention. For example, a path for tally signals from the remote production center’s vision mixer [switcher] to alert on-site camera operators when their shot is “live.”

There is, of course a solution: TSL’s AIB-range, a true Anywhere Interface Box designed especially to give even the remotest of remote broadcast situations multiple connectivity paths – all but tin cans and string – to communicate with a nearby or far off production control center.

The AIB range was developed by DNF Controls – now a valued member of the TSL Products family – at the behest of a major North American “nothing but sports” channel to streamline the flow of control data during remote telecasts. The resulting AIB product – currently offered in four increasingly capable versions – emerged after extensive feedback and “been there; done that” advice from hands-on field engineers. Adding to its “goof proof” ease of operation, multiple non-volatile memory configurations can be created, stored and replicated using the AIB’s intuitive, programmer-free Web-based set-up tools.

Operators in the field have added to the AIB’s versatility with innovations of their own. For example, sending scoreboard data to production central as serial data, or triggering an alert to the control room when there’s an unplanned break in the action so extra commercials can be slipped in.

FIND OUT MORE ABOUT THE AIB4 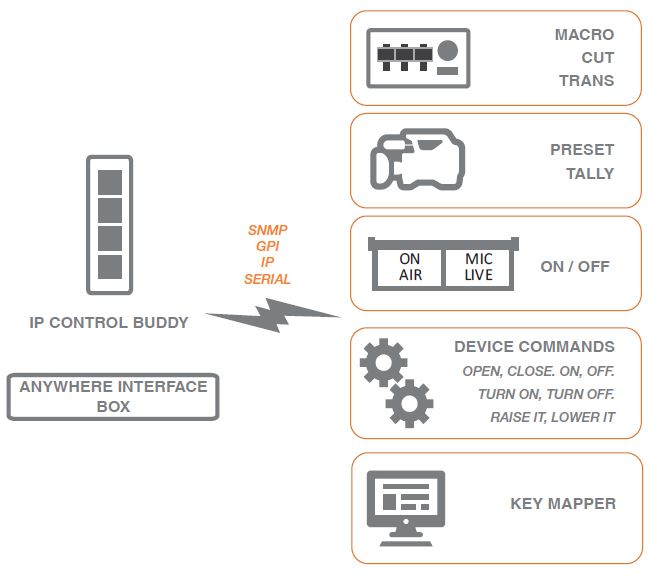 Latest From The Hub