An east coast-based Big Four broadcaster has been taking full advantage of the latest advances in high-speed, IP-based technologies to streamline and increase the resilience of its network operations. Headquartered in a high cost-of-living urban center, the broadcaster’s ability to modernize and expand its technical facilities was hindered by multiple factors, including the ageing infrastructure of both its landmark building and that of the city itself. In addition, the lessons of 9/11 and more recent storm-surge flooding, power-grid failures, etc., have made planning for disaster recovery and operational redundancy a top-of-mind concern, not only within the broadcast community, but for most large, multifaceted organizations.

Step one: Decommission the primary network operations center (NOC) in midtown and replicate its functions in a suburban facility just a stone’s throw away in another state. For added redundancy and operational flexibility, a second NOC in the western United States is being ramped-up to mirror the new primary’s capabilities.

Nevertheless, production control rooms for the network’s highly rated news and entertainment content have remained mostly in midtown and depend on timely status and device triggers from the NOC. Enter DNF – now a valued member of the TSL Products family – with its highly customizable, user-programmable GTP-32 system control architecture. Technology managers at the network’s midtown facility were already well versed in DNF’s ability to control virtually anything from anywhere there’s a bit of connectivity.

By adding several GTP-32 systems to both NOCs and the midtown production control rooms, Under-Monitor Display (UMD) information, as well as triggers to cue and activate assorted devices, are being seamlessly backhauled in real-time to where they’re needed. Operationally, the NOC’s play-to-air automation “sees” the GTP controller as a familiar router; it’s midtown counterpart also identifies as a router to the network’s facility-wide routing system, albeit of a different brand.

In addition, the pairing of GTP and IP Control Buddy are used to drive text-to-speech timing devices in production control. The GTP monitors and passes UMD data, then issues a command to an IP Control Buddy in the PCR to begin an audible countdown that helps on-air directors transition into and out of a commercial break with greater accuracy.

In the grand scheme of upgrading, rebuilding, and expanding complex network facilities, the “glue” devices that help disparate subsystems communicate and maintain a seamless workflow can be easily overlooked. In an ideal world, interoperability between various manufacturers’ equipment would be a given; in the real world, however, that’s rarely the case for several reasons. Competitors, friendly or otherwise, typically safeguard the “secret sauce” of their operating software; keeping-up with the myriad of new product protocols, patches and upgrades is both time and manpower-consuming; and, of course, proprietary systems help to justify a single-source configuration.

Interfaced to video servers and allow the control room to access to any individual server channel. 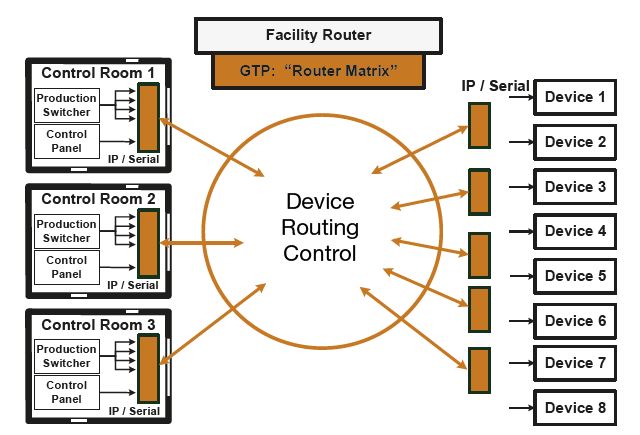 Find out more about the GTP-32 Control Processor

“The TSL PAM2 MK2 gives us the power to monitor loudness for compliance with new broadcast standards, accurately meter audio for many sources and provide phase information. We are very pleased with the performance of the PAM2 MK2 units.”